The county covers an area of about 760 sq.km. in Upper Bavaria’s North, between the urban centers of Munich and Ingolstadt.

It is an elongated county with 19 towns and municipalities. Its landscape is dominated by the smooth tertiary hill country in the South, and by the vast plains of the Danube Valley in the North.

Three rivers cross the country: Ilm and Paar from South to North, and the Danube from West to East.

The recondite, fertile loess soil of the tertiary hill country between the Ilm and Paar rivers provides perfect conditions for the growing of hops – the county’s most prominent plant. This “Green Field” - the landscape right and left to the Ilm River – shapes the Hallertau. 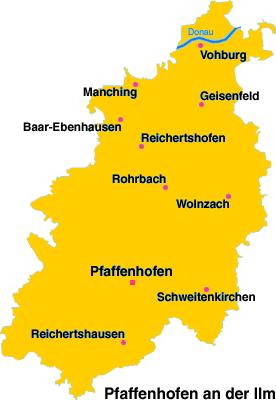