Highlights of the City Region of Nuremberg

Nuremberg's landmark towers high above the city: the Imperial Castle. The castle, (part-time) residence of all Emperors of the Holy Roman Empire between 1050 and 1571, is one of the most important imperial palaces of the Middle Ages. Open for visitors are: The Palas (the main building) with its generously decorated imperial rooms, the twin chapel, the deep fountain, and the Sinwell Tower; also a large collection of weapons and tools.

The Christkindlmarkt in Nuremberg is most famous Christmas Market of the world, and the widest-known event to take place here. The „Town of Wood and Cloth“ always opens its doors on the Friday before Advent Season.

Its special charm is due to the historical scenery on Nuremberg's main market square with the Frauenkirche, the „Beautiful Fountain“, and the view on the Gothic churches St. Lorenz and St. Sebald. The traditional range of gingerbread, fruitcake, Bratwurst, and mulled wine, as well as the sparkling stands, all get the visitors into the right Christmas mood. 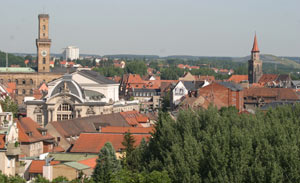 The City of Fürth has the highest density of architectural monuments among Germany's larger cities: 17.84 per 1000 residents. The inner city alone features 60%, or 1169 out of the 2000 monuments. These include much more than the „usual suspects“ such as the City Hall, the City Theater, or the Berolzheimerianum Theater; the strong points of the „shamrock town“ lie generally less in single monuments than in ensembles.

In May 2004, dinosaurs have been resurrected in Fürth's Dino Park by Espan Street. Awaiting their guests are the huge Diplodocus with a length of 27 meter, or the 14-meters long Allosaurus, which was more dangerous than the famous Tyrannosaurus Rex. A specialty of Dino Park is the „Klopfplatz“, where everybody can pick up chisel and hammer to find their own fossils (and, of course, take them home).
Copyright Panorama Fürth: Erich Malter

The city has Bavaria's second-largest University and is on its way to become Germany's capital of medicine. An attractive shopping and culture town with one of Germany's best-preserved baroque planned centers.

More than 250 years ago, beer of local breweries was stored in the cellars of Erlangen's „Burgberg“ (castle hill) to be kept cool and fresh for the citizens during the hot summer months.

Highlight of the Franconian (and Bavarian) folk festival calendar is Erlangen's hill parish fair, in short „Der Berg“ (the hill). Created when the Pentecost Fair was moved from the center up to the castle hill in 1755, it is now Franconia's largest folk festival with more than one million guests. Eleven beer cellars serve guests from near and far the special parish fair beer in traditional tankards.

An important difference to the Oktoberfest in Munich (and to other Bavarian festivals) is the unique location on top of the castle hill, as well as the high portion of young people due to the local University. While mornings and afternoons are quiet and dominated by traditional Oompah Music, the party really gets going at night: Remarkable how in all the cellars guests are standing on their benches, singing and partying to pop and rock classics from all decades. One of the hot spots of recent year has been the „Entla's Keller“ (a Franconian term for „duck cellar“). After the „Berg“, everybody meets in the center to continue the fun in one of the many, and crowded, taverns and pubs.

Below the magnificent, old chestnut trees are the best spots to sit and try Franconian specialties, even outside „Berg“ season.

Gold leaf has been beaten in Schwabach for the last 500 years. This almost forgotten trade is still practiced by nine manufacturers today, making the town the world's center of gold leaf production. Locally manufactured beaten gold is exported to all over the world. Towers of orthodox churches in Ukraine, Palace Domes in the Emirates, and many other beautiful structures are decorated with this material. 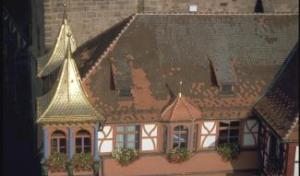 Since 2001, Schwabach has a new landmark: The Golden Roofs. Initiated by the city manager, citizens bought golden tiles for 99 Mark a piece, with which the city hall's roof was covered. 2000 tiles were financed in that way. The tiles are covered with 24-carat Schwabach beaten gold, so that further treatment was unnecessary. According to experts, the roofs will still be gleaming like today for at least 50 years.

To get to know the town a little better, you have the opportunity to walk the Golden Mile, passing ten locations in the historic center that are more or less connected to beaten gold. Your attention will be directed by the steles, pillars of 1.8 meters of height, standing directly near to the sights.